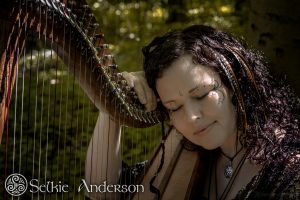 Selkie Anderson is a musician and singer on a journey through many creative worlds. With her fairytale instruments she captures the magic which she experiences in nature, stories and the adventures of life. The small enchanting stories and little wonders on the road spark her fantasy just as much as mystical places and old legends.

And the little wonders are everywhere. With her travel harp, she likes to explore new places and find inspiration beside the well worn paths. Some of these locations can be seen in her lovingly made video projects. Out in the woods close by her home is the birth place of many songs from the album “Magical Woodlands – Celtic Harp Songs and Mystical Melodies”.

Selkie has been playing musical instruments and singing in rock and metal bands for fun all the way back to her school days. Over the years she cultivated a fascination for unusual sounds and instruments. As she went deeper into music, she soon began writing her own songs and was on the lookout for interesting instruments to play. The hang crossed her path in the mid 2000s. This was the most unusual and beautiful instrument she had heard so far and it was love at first sound.

Inspired by the soft tunes of this soothing instrument, her musical journey took a new turn. A strong connection to the Celtic harp lead her further down the path of finding new instruments and her first harp came to Selkie in 2010. It quickly became her main instrument.

Aside from her Solo performances, you can find the more mystical side of her music under the darkfolk project Tribe Spiritwhich I started in 2016. I also collaborate with partner Mike Modulacja, who is a beatmaker and composer - together we perform as the duo "Mystical Wanderers". Since 2014 I am also part of the performance team of the German fire group Feuerflut .

Single: A Drop in an Ocean